Presented by the Eagleton Institute of Politics 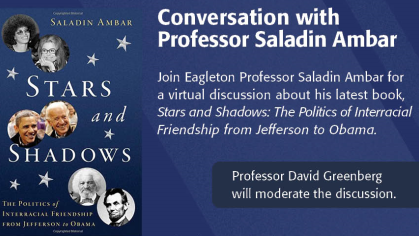 Join Eagleton’s Professor Saladin Ambar for a conversation about his new book: Stars and Shadows: The Politics of Interracial Friendship from Jefferson to Obama and listen to the stories of the friendships of highly influential cultural icons and political figures.

Ambar is a Senior Scholar at Eagleton’s Center on the American Governor and Professor of Political Science at Rutgers University-New Brunswick. He is the author of four books, including Malcolm X at Oxford Union: Racial Politics in a Global Era (Oxford University Press), which was nominated for a Hurston/Wright Legacy Award for best non-fiction book written by an African American author.