Presented by the Division of Continuing Studies, Office of Summer & Winter Sessions 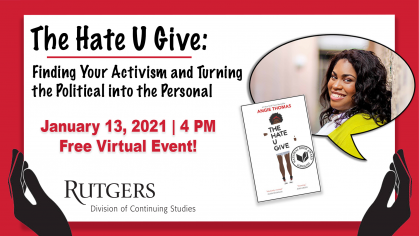 Join bestselling author Angie Thomas as she presents The Hate U Give: Finding Your Activism and Turning the Political into the Personal.

In this talk, Angie Thomas traces the development of her captivating debut, The Hate U Give—and in so doing, speaks to the heart of race, activism, and social change in America today. She explains why young black people need to see themselves in fiction—especially as they are forced to see themselves, traumatically and routinely, as the victims of discrimination, poverty, and police brutality. She demonstrates why we need more compelling depictions of black girls in art, often lost in discussions of black youth in general. She argues for writing that can turn the merely political into the deeply personal: a way to inspire action and speaking truth to power.

The Hate U Give, which was also adapted into a blockbuster film, spent more than three years on The New York Times bestseller list. The novel explores the world of sixteen-year-old Starr Carter: a girl who walks a careful line between her upper-crust prep school and the poverty-stricken neighborhood where she grew up. But when she witnesses a police officer shooting her best friend Khalil—an unarmed youth—Starr is plunged into even more uncertainty.

Thomas is the recipient of the William C. Morris Award and the Waterstones Children’s Book Prize, and was nominated for the Michael L. Printz Award and the Coretta Scott King Award. She is the inaugural winner of the Walter Dean Myers Grant, awarded by We Need Diverse Books.